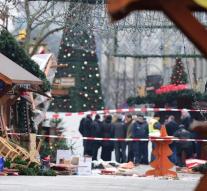 berlin - The arrested Pakistani is not the perpetrator of the attack on the Christmas market in Berlin. Writing Welt.de. The perpetrator would still roam freely in the German capital.

' We have the wrong man, '' the newspaper drew out of the mouth of this source within the police of Berlin. ' And with a new situation. Because the true perpetrator is armed at large and can cause misery. ''

Earlier it was known that the man who was arrested shortly after the attack near the market, something denied to have the attack to do.