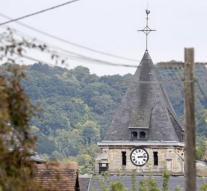 - One of the offenders who committed Tuesday an attack has been identified in a French church. The nineteen-year-old Adel Kermische was an acquaintance of the French intelligence services, said French prosecutor at a press conference.

In 2015 he tried to travel to Syria. Since then, he was under electronic surveillance. The identity of the second perpetrator is still being investigated.

When the two perpetrators invaded the church, there were six people present: the priests, three nuns and two believers. The 86-year-old priest came to an end when his throat was cut. Another 86-year-old man was very seriously injured, but according to the prosecutor, that person is now out of danger.


The perpetrators were eventually shot dead by police. Police have a third person arrested on suspicion of involvement in the attack. It is a sixteen year old Algerian-born boy against whose older brother is an international arrest warrant in force.