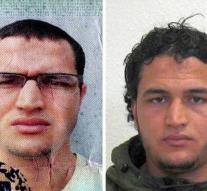 amsterdam - Terrorist Anis Amri was after the attack on the Christmas market in Berlin via Amsterdam Sloterdijk station traveled to Italy. Reported that the French TF1. He would have taken a bus to Lyon in Amsterdam and this is not checked.

Amri was spotted in the afternoon of Thursday, December 22 at the French station Lyon Part-Dieu. There he bought a ticket to Milan.

A day later, the Tunisian slain at a station in Milan. It is not yet clear what he has done in the meantime.

The Italian newspaper La Repubblica claims that Italian researchers in the luggage of Amri found a phone with special SIM cards. The cards during a promotion of a telecommunications company distributed exclusively in the Netherlands on 20 and 22 December. This happened exclusively in Breda, Nijmegen and Zwolle.