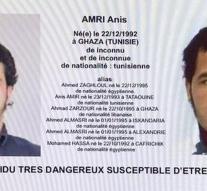 The card would be between 20 and 22 December have been handed out in shopping centers in Breda, Nijmegen and Zwolle, according to the newspaper La Repubblica and Corriere della Sera.

On 19 December Amri drove a truck into a Christmas market in Berlin. In addition, twelve people were killed; 48 people were injured. Four days later, the Tunisian was shot dead by police in Milan.

SEE ALSO: We know about the suspect in the attack in Berlin

What Amri did in the meantime is not yet clear. He bought a ticket Lyon to Milan. Perhaps he traveled through the Netherlands to France.