Home / World / Ocean under the ice of Saturn's moon Dione 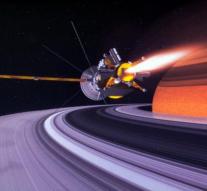 brussels - There appears to be more water in the universe to exist than we thought. Under the ice of Saturn's moon Dione is a deep ocean of liquid water. That researchers at the Royal Observatory of Belgium (ROB) discovered.

They did this based on new data from the space probe Cassini. In two other moons of Saturn, Titan and Enceladus was pretty sure there was water under the ice. Also in Europe, a moon of Jupiter, though it was clear that there was water. Water is a good indication of life on a planet.

The Dione ocean is tens of kilometers deep. Still waters run there too deep, because although there Dione quietly appears to be, the scars on the surface show that there has been a tumultuous past. There are great ice cliffs encountered.

Ocean Dione was the scientists probably since the birth of the moon and is therefore a good environment for microscopic life.