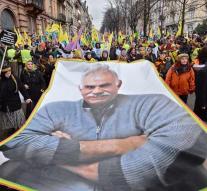 - "The conflict can be resolved if the negotiations be resumed within six months between the Turkish state and Kurdish rebels. That the captured PKK leader Abdullah Ocalan said, according to his brother."

"Mehmet Ocalan was the weekend the first family that Abdullah Ocalan in prison, was allowed to visit for two years.,, He said that if the state is willing to this project, we can accomplish within six months and that the previous peace process is not completely wiped out, '' said Mehmet Ocalan.,, This is not a war that can win one party. ''"