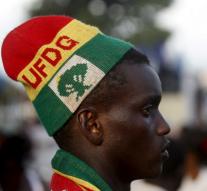 - Observers from the European Union (EU) and the African Union (AU) do not agree with the criticism of the opposition in Guinea's presidential elections last Sunday.

The seven opposition candidates, that fraud was committed. However, the EU observers labeled the election Tuesday as " valid ", that of the AU called the vote " transparent ". The rash late in coming. Sitting president Alpha Condé is favorite to lead the poor West African country for another five years . Its competitors Monday made ​​it clear that they do not resign if he actually wins.

" The election was a charade ", said the main opposition leader Cellou Dalein Diallo. According to him, were allowed into the city of Labe example, only people at the polling booths which had voted for the incumbent head of state five years ago. But observers have not seen that kind of irregularity. Speak the EU observers of. logistical problems