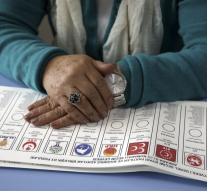 strasbourg - The elections in Turkey were hampered by restrictions that were imposed by the authorities on the media through violence and the security situation in general. This is reported by the official observer missions of the Council of Europe and the Organization for Security and Co-operation in Europe (OSCE) on Monday.

Officials and members of parties, especially the pro-Kurdish HDP, were arrested in the run-up to parliamentary elections on Sunday or attacked, so they could not perform good campaign, said the observers. They are also " deeply concerned " about restrictions on press freedom.

The elections were won by the AK Party of incumbent President Recep Tayyip Erdogan. " Unfortunately, the campaign for the elections was characterized by dishonesty and, seriously, fear ", judge Andreas Gross, head of the parliamentary observer mission of the Council of Europe.

" Although Turkish citizens a choice between political alternatives in this highly polarized election, the electoral process was affected by a rapidly diminishing choice of media and restrictions on freedom of expression ", said Sanchez Amor which the OSCE mission led.

The AK Party was favored by three of the five national television channels were monitored, as were further identified. At some stations, the Internet was blocked, allowing voters according to observers had less access to a wide spectrum of ideas and information.

Some media outlets have even just acquired. Observers also express strong criticism of the investigations into journalists and media that would support terrorism or Erdogan would offend. Further violence in the mainly Kurdish southeast of the country had a " significant " influence the elections.

Election day was generally peaceful and efficient. However, it was to go observers asked at seven polling stations were gone and people who wanted to observe in some cases on behalf of political parties denied access. The counting of votes proceeded " transparent ", although some irregularities were noted.