Home / World / Obama will not talk to Duterte 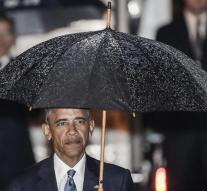 - US President Barack Obama will not have a meeting with his Philippine counterpart Rodrigo Duterte. The pair were speaking in Vientiane with one another. In the capital of Laos is a meeting of the Association of Southeast Asian Nations (ASEAN).

Duterte said in advance that Obama was not the lesson him go read about the tough approach to drug traffickers and users in the Philippines since he came to power.,, He must treat me with respect and do not question me about human rights. 'Duterte would then berating the US president. Duterte called Obama' a bastard 'if he would still speak to him on the situation in the Philippines.

Barack Obama responded from Hangzhou in China by saying that he was considering to cancel the meeting on Tuesday. The White House said Monday, according to the CNN that the deal is effectively canceled. Obama now talks with South Korean President Park Geun-hye.