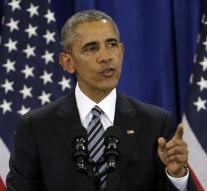 - Even before Barack Obama leaves the White House, he wants his intelligence to get a research report on cyber attacks and foreign interference in the run-up to the presidential elections on 8 November. Obama has given the services commissioned to make a 'complete overview', said his national security advisor Lisa Monaco Friday.

On January 20, Obama will leave as president of the USA and Donald Trump takes over. Trump's Democratic rival Hillary Clinton has suffered considerably during the campaign by hackers. Who stole thousands of e-mails from the top of her Democratic Party and its campaign chief John Podesta. Via WikiLeaks came to be the mails on the street.

Officials within the American authorities have repeatedly said that hackers have struck from Russia. The FBI has been researching accordingly.