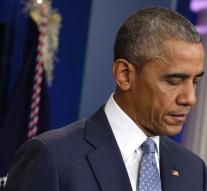 - US President Barak Obama has urged for calm and national unity. He did so in response to the murder of three policemen Sunday in the city of Baton Rouge.

Obama said that what happened should not be used to provoke intense debate during an already charged political campaign.

,, We have things that divide us and which are not new, '' Obama said at a news conference.,, Why it is so important that everyone now focuses on words and actions that can unite this country further. ''


The agents in Baton Rouge Sunday were probably lured into a trap and opened fire. Less than two weeks ago, was shot and killed a black man during a struggle with two white police officers in the city, which led to nationwide protests.