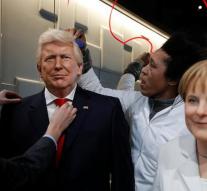 washington - Departing President Barack Obama on Thursday made farewell phone of German Chancellor Angela Merkel. He thanked Merkel and her husband for their friendship and for their efforts to deepen the good relations between Germany and the United States.

Obama added that this is the last call has been in his capacity as president. Friday he hands over power to Donald Trump.

The president praised Merkel for her courageous and unwavering leadership. He had also thanked the chancellor in November, during a visit to Germany. Obama allowed himself then mentioned that he would vote for Merkel if he was German.