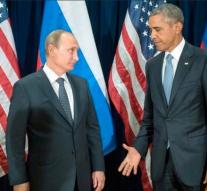 moscow - US President Barack Obama speaks next month in China his Russian counterpart Vladimir Putin. The two will talk on the sidelines of the G20 summit in Hangzhou on the situation in Syria, the Kremlin announced Wednesday.

A spokesperson will,, anyway 'is an exchange between the two heads of state of their ideas about the ongoing civil war in the Arab country. The G20 summit is at 4 and 5th of September.