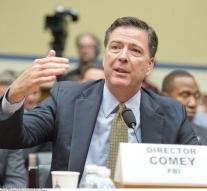 - The fiercely criticized FBI Director James Comey has the support of US President Barack Obama. He called Comey according to the White House an honest man who did not intend to influence the elections.

Comey was this week criticized by friend and foe after he let the Congress know that the FBI has found emails that might relate to the e-mail scandal Hillary Clinton. Both Democrats and Republicans responded ferociously to the disclosure.

Critics find that Comey has affected the elections. The e-mail scandal is particularly sensitive in the US. The leader of the Senate Democrats, Harry Reid, accusing him even of breaking the law.