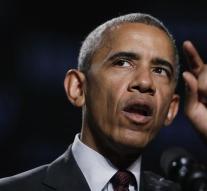 - US President Barack Obama on Wednesday 214 prisoners in federal prisons waived part of their punishment. It informed the Justice Department in Washington.

It is the largest number of pronounced sentence reductions in a single day in decades. The sentence remissions are especially beneficial to prisoners who have been sentenced to long, sometimes life sentences for drug offenses, although they were not violent.

The shortening of imprisonment is part of a program of the Obama administration for judicial reform in the United States. The US president criticizes some time that the number of prisoners in the United States in relation to the population is considerably higher than in other modern democracies.


In 2013, the US had in every 100 000 people in 698 detention. In a country like Germany were that last year only 76. Obama has authority to pardon in federal prisons. There's only 10 percent of the more than 2 million prisoners in the US firm.