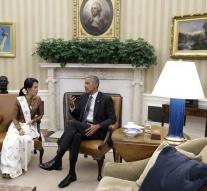 - President Obama lifted the US economic sanctions against Myanmar Friday. In a letter to Congress, he writes that Myanmar 'substantial progress' made towards democracy, including elections in November 2015 which brought the party of former opposition leader Aung San Suu Kyi to power.

Obama received Suu Kyi last month in Washington. She then invited American companies to come out to her country 'to make a profit. '

General economic sanctions against Myanmar, including a ban on investment and trade, were already lighted. The sanctions that are now raised more focused against figures of the former junta and their companies.