Home / World / Obama : let us not terrorize us 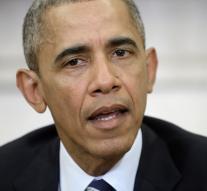 - " America can not be terrorized. We are strong and resilient. " That said President Barack Obama Saturday in his weekly video address. He called on Americans to be united after the bloody shooting earlier this week in San Bernardino. Obama called the Californian city " yet another American community that is crushed by unspeakable violence."

It should in his opinion be more difficult for criminals to get guns. Obama takes the " mad " Americans who are on a 'no- fly' list still can buy firearms. " If you are too dangerous to be allowed to get on a plane, then you are by definition too dangerous to buy a gun ", said the president.