Home / World / Obama in the gap for ex-prisoners 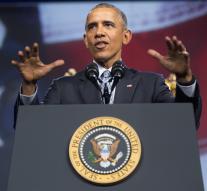 newark - US President Barack Obama wants Monday during his visit to Newark, New Jersey highlighting the need to assist returning ex- prisoners into society. He previously announced steps to those in local media have been seen as part of Obama's efforts to change the criminal justice system. That should be cheaper, more reasonable and equitable, including through long prison sentences for various crimes and offenses to reduce.

Obama visits Integrity House, an old center for assistance to addicts, and meet the Democratic senator and the mayor Cory Booker of Newark Ras Baraka. Booler of criminal law reform has made ​​its spearhead. Baraka was earlier this year one of the invited guests at the White House about the exceedingly large numbers of prisoners arches in the US. About half is fixed for drug offenses.

New Jersey has succeeded between 2011 and 2014 to reduce the prison population by 9.5 percent due to reduction of sentence, probation and perpetrators of minor drug crime less severe punishment.