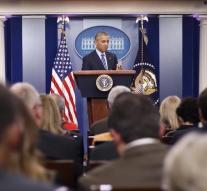 washington - Barack Obama has acknowledged Friday that he 'can not claim that we have been successful in Syria.' With that realization he goes to bed every night, he said during his last regular press conference as President of the United States. Despite the lack of results he still believes his attitude towards the Syrian civil war was correct.

According to Obama and his administration to provide support was the 'moderate opposition' best. Obama said 'the impulse to want to do something' to understand in Syria, but he had to take into account what was sustainable and realistic. A 'low-intervention' was not there. 'Unless we were going in full and were ready to take over Syria, we would have had problems. '

For such an operation would have required a large number of ground troops, while there was no international mandate.

In 2013, there seemed to be a possibility that Obama went to bomb the Syrian regime. He wanted Congress to ask permission for military action. When it seemed that he would not get, he abandoned the plan.

Finally grabbed the US or the fight against IS by the extremist group to attack from the air. But the conduct of further conflict between the Syrian army and its allies against various tangled jihadists and more or less moderate rebels was American influence small.

America could do little more than watch as atrocities like the bloody siege of Aleppo taken place and Russia is indeed active in the fight mixed on the side of Assad ally. About the horrors in Aleppo Obama spoke Friday again appalled. According to him, the Syrian regime and Russia 'blood on their hands. '