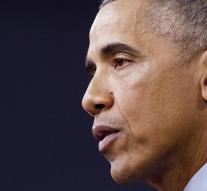 - In a last effort his inheritance to set the fight against climate change safely, President Barack Obama created the largest marine reserve in the world, reports the White House Friday.

Obama quadruples the size of the Papahnaumokukea Marine National Monument in Hawaii to around 1.5 million square kilometers. In the area around the islands of Obama's birth state's commercial fishing no longer allowed. In the area there are 7,000 living organisms, including the oldest in the world: a coral aged 4265 years old.

The fight against climate change to be one of the central themes of Obama's presidency, but many initiatives were fixed in Congress dominated by Republicans and lawsuits. But he used his presidential powers to declare more than 100 million hectares of land and sea protected area on their own.


The nature reserve was established in 2006 by then-President George W. Bush. It was true at the time as the largest marine reserve in the world. The initiative was followed worldwide and other marine reserves surpassed later in Papahnaumokukea surface. With Obama's action will get that status back.