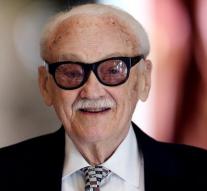 - US President Barack Obama has written a letter to the wife of the deceased musician Toots Thielemans.

The letter Saturday during the funeral was brought by the American jazz pianist and composer Kenny Werner, a close friend and colleague of Thielemans. He read the letter during the ceremony. 'Dear Huguette, I was heartbroken when I heard of the passing away of your husband. I hope shared memories will ease your suffering. May the music of Toots guide you and offer consolation. I am sure they will do for all of us. Draw strength from the support of friends and family. know that you will be in my mind in the coming days. '

The world famous harmonica player, who Monday at the age of 94 died in a Belgian hospital, also had an American passport and lived for years in New York. Among the approximately six hundred people Saturday Toots' funeral attended, was the US ambassador to Belgium.


Even Prime Minister Charles Michel, Prince Laurent made their appearance.