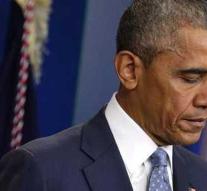 chicago - Former President Barack Obama has condemned the decision of his successor Donald Trump to denounce the nuclear agreement with Iran. He called it 'ill-conceived' and a 'serious mistake'. Obama closed the Iranian deal in 2015 with support from the world powers France, Germany, Great Britain, Russia and China. The European Union also joined in.

Turkey, like the EU, was not pleased with the withdrawal of the US. A spokesman for President Recep Tayyip Erdogan said that the unilateral withdrawal from the agreement will cause instability and new conflicts. However, the multilateral agreements with the other countries will continue. He added that Turkey remains an opponent of any form of nuclear weapons.