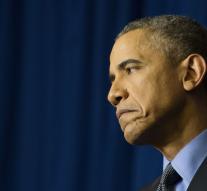 - President Obama on Wednesday after the shooting in San Bernardino called for an approach of this kind of violence throughout the political front in the United States. Not only his own Democrats but also Republicans take action against it at every level of government.

" We do not know what the motive is, but what we do know is that we can take steps to make America safer ", the president said.