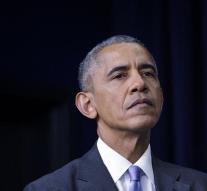 washington - The United States will take action against Russia for its alleged interference in the US presidential election. That President Barack Obama Thursday in a radio interview said.

According to the White House Russians were behind the hacking of email accounts of the Democratic party leadership. Prominent members of the staff of Obama Thursday accused Russian President Vladimir Putin openly involvement. Moscow has called the allegations 'nonsense'.

'I think there is no doubt that if a foreign power trying to influence the integrity of our elections... we must take action, and we will, 'said Obama released parts of the interview with National Public Radio. 'At a time and a place of our choice. One of them we may disclose some other things do not. Mr. Putin is aware of my opinion on this. I have spoken directly to him. '