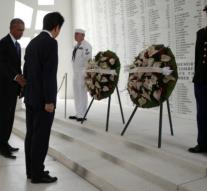 honolulu - US President Barack Obama 75 years after the Japanese air attack on Pearl Harbor Naval Base Japanese Prime Minister Shinzo Abe received in Hawaii. The meeting of the two leaders is seen as the next step in the reconciliation between the countries, which are close partners in the field of trade and security.

The two leaders have laid memorial wreaths at the USS Arizona Memorial, in honor of the American soldiers who died in the attack. They then held a moment of silence.

Obama had visited in October, the first sitting US president to the Japanese city of Hiroshima, where the Americans the first atomic bomb dropped on Japan in 1945. He recalled that at the tomb of the 140 000 victims, but offered no apologies.

' The horrors of war must never be repeated, '' Abe said prior to his departure from Tokyo. Abe is the first Japanese prime minister pays tribute at the memorial.