Home / World / Obama: agreement best chance to save the earth 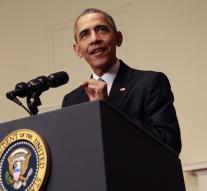 - As a strong and historically, thus describing US President Barack Obama Saturday climate agreement reached in Paris. "This agreement is the best chance to save the Earth," Obama said.

The American people can be proud, says the president. " It is a tribute to the American leadership ". According to Obama, the United States has changed over the past seven years, the global leader in the fight for climate change.