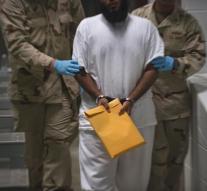 washington - President Barack Obama wants for his resignation 18 prisoners transfer from the military prison at Guantanamo Bay. The number of prisoners therefore descends again, but the promise Obama did in 2008, even before taking office to close the controversial prison in Cuba failed. There currently are 59 more captives.

Employees have Obama to Congress stated that the 18 detainees be sent to different locations: Italy, Oman, Saudi Arabia and the United Arab Emirates. This should happen before the inauguration of the president-elect Donald Trump on January 20, 2017.

It is the last time that prisoners can be during the Obama presidency, as this 30 days must be announced in advance transferred. Trump has already said that Guantanamo remains open. He wants prison ' stuff with bad guys. '