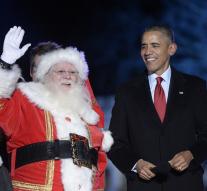 - President Barack Obama and his wife Michelle have given up their list of favorite Christmas songs. At the top is 'O Tannenbaum', better known to us as O Fir, in an instrumental jazz performance.

The list was announced Thursday by streaming service Spotify.

The playlist of the Obama's are farther Let It Snow by Boyz II Men, All I Want For Christmas Is You by Mariah Carey and 8 Days Of Christmas Destiny's Child.

Even Vice President Joe Biden and his wife Jill have handed in a playlist. With them goes something less corny to it. The Bidens chose to include A Sky Full Of Stars by Coldplay, U2 Christmas and Merry Christmas Baby by Bruce Springsteen.