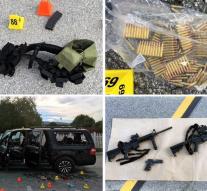 - For the first time in almost a hundred years opens the New York Times Saturday with an editorial article. Under the headline ' Put an end to the arms epidemic in America, "exclaims the newspaper to put an end to the open sale of large firearms in America.

" It is a moral damages and a national disgrace that people can buy weapons with which people can be violent and efficiently slain ", according to the New York Times. " It's armaments, which is put on the market as a useful tool for macho own direction. " The newspaper thinks that such automatic weapons should be banned.

The reason for the editorial article is shooting Wednesday night in San Bernardino, where fourteen people at a staff party were shot with guns that are just in the store were on sale. Big shootings- 'mass shootings- in the United States are the order of the day. Virtually every week somewhere in the country in a shooting attack in which several deaths.

" Our elected leaders say a prayer for the victims and then they reject the simplest containment of weapons of mass murder ", the newspaper said. " They distract us by including the word terrorism in the mouth. But let's be honest : these mass shootings are all acts of terror. "

The New York Times finds that the country's upcoming presidential election must seize in order to show that " America civilization is not yet lost ".