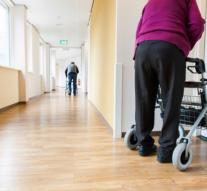 - Nursing homes provide no data to attend the Health Care Inspectorate (IGZ). It must first be clear what they want to know exactly what they are going to use it and how the information is going to be published, said a spokeswoman for ActiZ.

The publication by the Inspectorate of a black list of the eleven worst performing healthcare caused an uproar last summer. 'This has only yielded negative news. The careless disclosure and categorization of the outcomes of the Inspectorate lists in July this year have left deep scars among staff, residents and their families about the alleged insecurity in nursing homes. Therefore we have become hesitant, it should now be clear first, 'said the spokeswoman of ActiZ.

The approach of the Inspectorate would, according to its better care for individuals should not publish lists without interpretation.

IGZ says surprised to be on the ActiZ step. 'Talks on this walk for months, ActiZ does have agreed initially. We can not imagine that nursing homes are not for openness and transparency, 'says a spokesman. Requesting information on the nursing homes, according to him 'not optional. '

ActiZ stressed that nursing homes have no objection to openness. 'But openness also includes care. '