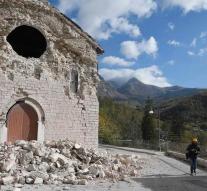 rome - The fear in the earthquake region in central Italy remains unchanged in size. Tuesday is again felt many aftershocks. The worst was, according to the Geological Survey a magnitude of 4.8. There is again caused damage but no serious personal accidents have happened.

In the village Ussita, according to the mayor several buildings that were still standing still collapsed after the big bang Sunday. 'It is an agony, it does not stop. 'His colleague from Castelsantangelo sul Nera had a similar story. 'Here everything is in order. The village is virtually razed to the ground. What still stands, is very unstable. '

In the affected region are certainly 30 000 people homeless. They are collected in the area in hotels and emergency shelters, but many victims have close to home even spent the night in their cars.