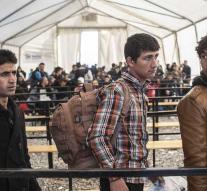 geneva - The number of people trying to flee across the Mediterranean to Europe has more than halved in the first half of 2018 compared to a year earlier. This is shown by figures from the International Organization for Migration (IOM).

The decline in Italy is even stronger, says the spokesman for the IOM, Flavio Di Giacomo. According to him, the number of migrants entering that country has dropped by 80 percent compared to 2017 and the trend of declining numbers is still accelerating.