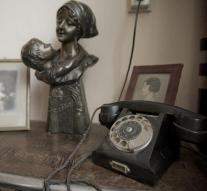 - The number of fixed telephone lines in the Netherlands for the first time dipped below the million. This is evident from Telecom Monitor for the first quarter of 2016 the Authority for Consumers and Markets (ACM).

It also turns out that the all-in-one packages of providers, with both telephony, television is offered as the Internet, are still hugely popular. As many as 6.3 million households in our country has such a package. In the first quarter, the number of parcels increased by five percent.