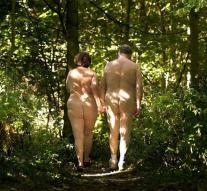 - Members have been told a German naturist club that they should cover their bodies in the future because it opens a refugee shelter nearby.

The center will open next month across the lake where the Family Sport-und FKK-Bund Waldteichfreunde Moritzburg to established since 1905. In the sequel she can no longer swim in their birthday suit because the migrants there could be offended.

A request for than just build a fence to keep the prying eyes of the applicants outside the door was rejected by the church, writes Bild. The rules on nude bathing would have always existed, but which in practice were never respected by the nudists. They are therefore not going to cover in the future.