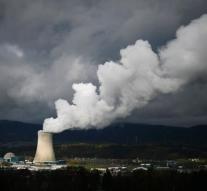 The Swiss population seems to rule in a referendum on Sunday at an accelerated closure of the five nuclear power plants in the country. According to provisional results rejects a majority of 55 percent of voters the proposal.

The Swiss are particularly concerned about the loss of independence in energy supplies and nuclear power plants are quickly closed. The Swiss government and energy sectors were therefore opposed to the proposal. The plants would be phased out of service in the period up to 2029 when the initiative would succeed.

The Swiss government announced in the wake of the Japanese nuclear disaster in 2011, plans to gradually close all nuclear power plants and replacing them with renewable energy sources. However, there is no deadline for those plans.