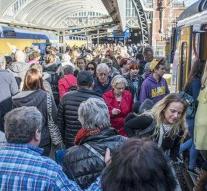 - NS is going to lure the 'hyperspits' in the morning with discounts at the edges of these very busy hours. That confirms NS topman Roger van Boxtel on Saturday evening at De Telegraaf.

The goal is to relieve the mega pressures in the train between 7.30 and 8.30. 'We do not want the traveler in the morning pits to be unnecessarily charged with higher costs. However, we want to encourage people to take on a job sooner or later to work or study. '

A spit charge, launched earlier this year in a special 'think tank' of scientists and experts on the track, is temporary from the job. NS wants every effort to better distribute the crowd so that there is more space in the train.

These subscription holders may travel with a 60% discount during the test period between 11 and 15 hours. Then NS is going to evaluate the results to decide on a wider roll-out of discounts by the end of this year.

In addition, NS puts 2.5 billion euros on new trains to reduce the number of pitches. At the end of the year, railway logless intercity services will be launched every 10 minutes on the Amsterdam-Utrecht-Eindhoven route. On the busiest routes, the number of passengers is growing by 5% annually, NS expects.