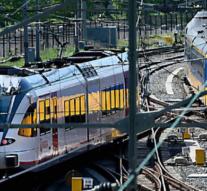 - Five former top executives of the transport NS, Abellio and Qbuzz stand Tuesday in Den Bosch in a so-called pre-trial court for fraud and corruption surrounding the procurement of public transport in Limburg.

The NS Group and former directors of the transport in question are suspected by the prosecution of bribery, forgery and / or violation of trade secrets. An external consultant is accused in this case. The contract of carriage from 2017 to 2031 has a value of 2 billion euros. The session will be held to determine what the state of affairs in the fraud. Only later the criminal case against the suspects is substance by the court.

Due to the irregularities had former railway CEO Timo Huges in June 2015 to step down. He has under the railway then made false or incomplete statements about his role in the affair surrounding the tender.

The Prosecution more suspects in the grain, but no decision to prosecute has been taken on them.