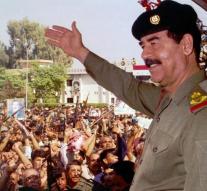 london - In Britain, there arose attention to the literary qualities of Saddam Hussein. The independent publisher Hesperus makes a novel that wrote the former Iraqi dictator translate into English. The novella is set in December 2016, ten years after his execution in the store. Which reported the British newspaper The Guardian on Monday.

Saddam completed the work of 186 pages just before the war broke out in 2003. His daughter would have taken the manuscript from Iraq with the intention to publish it in Jordan. However, sales of the book was banned. There have appeared some 'bootlegs' on the market, also in a few other languages ​​with sonorous titles like 'Vanishing Devils' and 'Out, Damned Bunch.

The book is about a tribe who lived 1,500 years ago on the Euphrates and the occupation forces expelled. A spokesman for Hesperus described it as a mix between,, Game of Thrones and House of Cards ''. In 2005, the recommendation of a critic of The New York Times was less encouraging:,, A pulp lot to forget. '