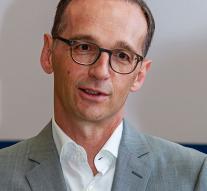 - The equation Lutz Bachmann made ​​Monday by Justice Minister Maas with Nazi minister Goebbels, the German minds keeps churning. Heiko Maas showed Tuesday, however, that he will not press charges against the leader of the Pegida movement.

Bachmann called during a speech in Dresden for 8000 audience that Maas after Hitler's propaganda minister and the former East German commentator Karl- Eduard von Schitzler the worst " mental arsonists " belongs in Germany.

Maas' social democratic party SPD almost immediately called for an investigation. Bachmann was " an enemy of the constitution and a case for the prosecutor " mentioned. The Secretary General of the SPD, Yasmin Fahimi, called the founder of Pegida Tuesday in a statement " a fascist madman that compares a thoroughly decent man as Maas with the chief ideology of the Third Reich ".