Home / World / Not all refugees test for MRSA 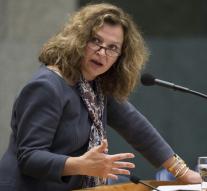 - It is not necessary for all Syrian refugees who enter the Netherlands to control the disease MRSA.

That said Minister Edith Schippers of Public Health in WNL On Sunday.

Among refugees MRSA may be more common than among Dutch. Therefore, asylum seekers are in a hospital first isolated and tested, was announced this week.

Schippers is not in favor of asylum seekers to test even before they reach a hospital. " The bacterium is also more common in pig farming, but we test all pig farmers not ", said Schippers.