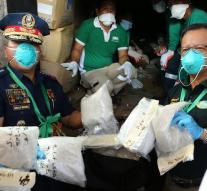 - Not all the dead who fell in the Philippines as a result of Rodrigo Dutertes 'war on drugs', are drug-related. It has informed the head of the police Tuesday the Senate.

Monday was police chief Ronald dela Rosa announced that in the fight against drug crime fell about 1800 deaths, has been president since June Duterte to power. Of these, 712 were drug offenders, and in the other cases involved,, drug-related incidents, '' he said, without going into detail.

The police came back there and said that not all extra-judicial killings which investigates drug-related. He now speaks killing in 1900. Also have 700 000 drug users and sellers indicated himself.


Also Delarosa Senate announced that approximately three hundred officers suspected of involvement in drug trafficking. He suspects they seized them to have sold drugs or that they have kept someone from the drug circuit the hand above the head.

Senior police interrogated by a Senate committee about the rise in the number of deaths in the country.