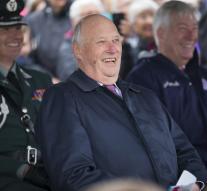 - The painting that the Norwegian parliament, Storting, presented to King Harald before his eighth birthday, was revealed on Monday. That happened in the presence of the royal couple and crown prince Haakon.

The painting was made by Norwegian artist Kira Wager. Who painted the oath of Olav V oath in 1958 in parliament. For the assignment she also had competition from five other artists. In the end, Wager's work was chosen because of her technique and the fact that the cloth fits very well with the collection already in the parliament building. Wager was also present at the revelation to give text and explanation about her work,

Harald celebrated his 80th birthday in May. At the festivities around his birthday he was offered the painting.