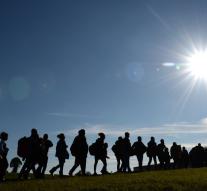 oslo - Norway has in view of the growing number of refugees tightened border controls. The next ten days, all the boat travelers from Germany, Denmark and Sweden, both on arrival and departure show identification. Aside from long lines delivered Thursday no problems, said a police spokesman told the Norwegian news agency NTB. "At this time of year there are not many passengers on the boats and most travelers are Norwegian. "

The number of refugees who came to Norway increased sharply in recent months. In total, the country expects this year 40 000 migrants.

According to the Norwegian Justice Minister Anders Anundsen the pascontroles can possibly later be extended to the road, rail and air traffic.