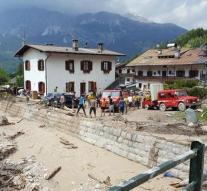 rome - While the heatwave 'Lucifer' continues to rage through southern Europe, northern Italy is plagued by storm and storm.

From Tuesday, temperatures also fall slowly in other parts of Italy, predicts the Italian Meteorological Institute.

On Saturday morning a woman came to the Dolomites when her car was buried under mud and debris, after emergency weather had caused a floodwave. In southern Italy, this weekend is no longer hot. Especially in the heel of the boot and in the islands of Sicily and Sardinia, temperatures have risen to record height in recent days. The feeling temperature reached the 55 degrees, according to the Italian press office ANSA.

Also parts of Spain and the Balkans continue to suffer from the heat wave, which has the nickname 'Lucifer' due to the hot temperatures. In the Adriatic coastal area, the current is threatening to fall due to the continuing heat that drives up the electricity consumption.