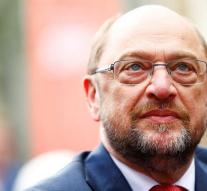 dusseldorf - Residents of the German state of North Rhine-Westphalia (NRW) go to the polls on Sunday to elect a new state parliament. The polling station in the state adjacent to the Netherlands is an important measure for the national elections in September.

Especially for the Social Democratic SPD, Sunday is at stake at the third and last state election this year. The CDU of Chancellor Angela Merkel recently won elections in Schleswig-Holstein and Saarland. NRW is strategically important because it is the state with most voters. There are more than 13 million voters.

For the SPD leader Martin Schulz from Hehlrath (NRW), the election is a home-match with high dedication. The former president of the European Parliament is ambitious for chancellorship, but the earlier defeat in the state elections raises the question of whether he is able to defeat Merkel. If the social democrats lose in a state where a SPD Prime Minister is currently in control, that's a big blow to the ambitious party leader.