Home / World / North Koreans may no longer work in EU 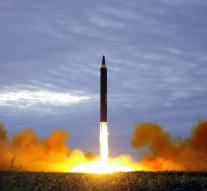 brussels - North Koreans may no longer work in the 28 countries of the European Union because the money they earn can be used for the Asian country's nuclear weapons and missile programs. By the end of 2015, 583 North Koreans had a work permit in the EU. In 455 cases this was in Poland.

The EU continues a series of other sanctions that the United Nations Security Council agreed this week in legislation. For example, a full ban on the export of coal, iron, iron ore, fish and shellfish, lead and looderts.

Measures are also taken against arms smuggling, joint ventures with foreign companies and access to international banks and other opportunities for capital. The Security Council also decided to ban a ban on textile and import for natural gas. Imports of raw and processed oil are also greatly reduced.