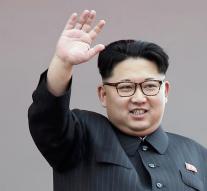 - North Korea has launched a rocket Thursday again. The attempt failed immediately after launch. The missile test came just hours after the United States and South Korea in Washington agreed to join forces in the fight against North Korea.

The rocket would be a medium Musudan and are launched from Kusong. From there it was Saturday a missile test, which also failed. According to the US and South Korean military's failed rocket launch was the eighth attempt in seven months to launch a rocket over a distance of 3,000 kilometers.

'We condemn the continued illegal provocative actions,' South Korea said in a statement.

US Secretary of State John Kerry said earlier that the US still 'everything will do whatever is necessary' to protect itself, South Korea and other allies against North Korea.