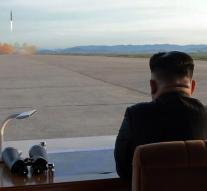 moscow - North Korea wants to increase the range of its ballistic missiles to 9000 kilometers. It is still unclear what time the North Koreans think about such projectiles, a Russian parliamentarian said after visiting Pyongyang against the press agency Interfax.

The North Koreans claimed to have a missile during the visit of the Russians, which could reach 3000 kilometers. According to Pyongyang, it is possible to reach American territory after adjustments.