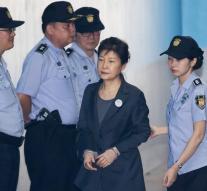 seoul - North Korea has ordered to kill former South Korean President Park Geun-hye. According to the Northern State Press Office KCNA, new information revealed that the 'traitor' Park was the brain behind a plan to kill 'supreme leader' Kim Jong-un.

KCNA did not indicate what is the source of the new information. A Japanese newspaper reported this week that the then president in 2015 gave green light for a plan to turn off Kim. Park is currently in a South Korean cell. She has been dropped because of a corruption scandal.

That Park has already been established, Pyongyang appears to have refrained from condemning her. Her former spy boss must also be killed, the North Koreans find. They demand the immediate extradition of the duo.

'We declare in our home country and abroad that we will imprison the traitor Park Geun-hye and the ex-director of the puppet agency for intelligence,' the North Korean authorities threatened according to KCNA.