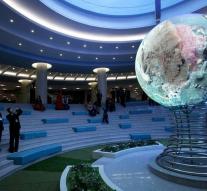 pyongyang - North Korea has big plans in the field of aerospace. Within ten years the country to plant its flag on the lunar surface.

International sanctions against the dictatorship are the ambitious plans are not in the way, says an executive at the North Korean equivalent of NASA in an interview with Associated Press.

'While trying the United States and its allies to thwart our work, our scientists will eventually prevail and the flag of the DPRK plants on the moon,' said Hyon Kwang Il, director of the Department of scientific research of the space agency.


According to experts, an unmanned moon mission ambitious but certainly attainable for the North Koreans.

'All this work is in preparation for a lunar mission,' said Hyon. He hopes that within the year when time comes.

Kwang Hyon Il, 'Within ten years to the Moon '

The launches and testing bombs get North Korea to stand on new sanctions. 'Ridiculous,' says Hyon. 'We continue to launch more satellites, some people may think. '

According to him, the satellites are used to gather data on agriculture and forestry and to improve the communications infrastructure. In the future also stand manned space flight scheduled for example to explore new planets.